aurora australis taken from the bluff at barwon heads in victoria. australia. 10pm 18/3/2015. 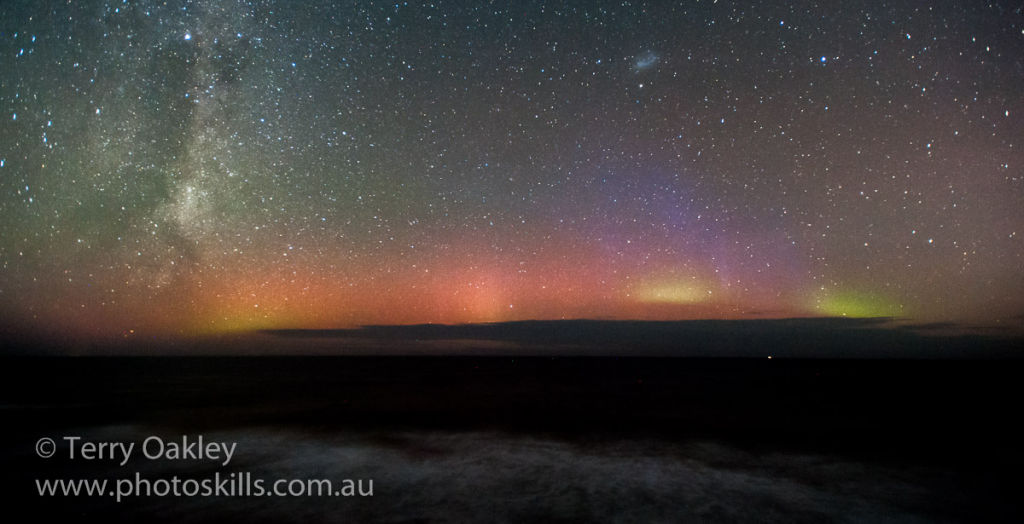 Aurora seen through breaks in the cloud circa 3am. Red glow with green beams.

A brilliant display with colours easily discernible, lasting around two hours. Rays reaching to the zenith

Very vivid aurora. Easily discernible colours, even the reds. I observed for over an hour and then it slowly decayed but the glow on the horizon (green) was still evident after another hour.


Solar activity reached high levels during the period. At approximately
11/1622 UTC, Region 2297 (S16W00, Dkc/beta-gamma-delta) produced an
impulsive X2/2b flare with associated Type II (est. shock speed 1461
km/s) and Type IV radio emissions, as well as a 160 sfu Tenflare.
SDO/AIA imagery observed ejecta leaving the flare location in a mostly
easterly direction. This region also produced an M1/1n flare at 11/1851
UTC and an M3 flare at 12/0446 UTC. Numerous mid to upper-level C-class
flares were also observed from this region over the past 24 hours.

Region 2299 (S07E53, Bxo/beta) rotated onto the East limb and was
numbered during the period. This new region produced a C7 flare at
12/0218 UTC with an associated Type II radio sweep (est. shock speed
1903 km/s). No LASCO coronagraph imagery is available. However, based on
the location of the spot group, any associated coronal mass ejection
(CME) that may originate from this area will likely be too far East of
the Sun-Earth line. Region 2298 (S11W52, Cro/beta) continued to develop
slightly but remained quiescent.

Due to an extended outage of SOHO LASCO coronagraph imagery, accurate
analysis of any CMEs associated with the X2, M1, and M3 flares is
degraded, at best. However, the presence of the Type II radio sweep
combined with SDO/AIA 304 imagery indicated there was likely a CME
associated with the X2 flare with at least a portion of the plasma cloud
directed at Earth.

.Forecast…
Solar activity is expected to be at low levels with M-class
(R1-R2/Minor-Moderate) flare activity likely for the next three days
(12-14 Mar). A slight chance for X-class (R3 or greater) flare activity
still exists as Region 2297 maintains its size and complex magnetic
structure. The forecast remains unchanged for the CMEs previously
mentioned in the prior discussion as it appears that a combined impact
of these transients may occur in the form of a glancing blow, mid to
late on day two (12 Mar).

A very rough estimate, based solely on the Type II estimated shock speed
and available SDO imagery, indicate the approximate arrival time of the
CME associated with the X2 flare at Earth is mid to late in the day on
13 March, prompting possible increases in solar wind velocities as the
transient passes Earth.


Solar activity was at very low levels. While Region 2282 (N11E38,
Eki/beta-gamma) continued to grow slightly in areal extent and length,
it only produced low-level optical activity. The other two regions on
the disk showed signs of decay and remained quiet.

.Forecast…
Solar activity is expected to be at low levels with a chance for
isolated M-class flares (R1-R2, Minor-Moderate) for the next three days
(11-13 Feb).


Solar activity reached low levels with a few isolated C-class flares.
The largest was a C3/Sf at 19/2048 UTC from Region 2266 (S06W12,
Dao/beta). Slight decay was observed in the smaller intermediate spots
of Region 2266. The rest of the spotted regions were stable or in
decay. No Earth-directed coronal mass ejections were observed during
the period.

.Forecast…
Solar activity is expected to remain at very low levels, with a chance
for C-class flaring for the next three days (20-22 Jan).


Solar activity declined to very low levels with only B-class activity
observed. Region 2259 (S17W42, Dac/beta-gamma) remained the largest and
most complex region on the disk, but continued its slow decay during the
period. The remaining regions were stable. No obvious Earth-directed
CMEs were evident in limited SOHO/LASCO C2 coronagraph imagery.

.Forecast…
Isolated C-class events are likely, keeping activity at low levels
with a slight chance for an M-flare (R1-R2, Minor-Moderate) for the next
three days (17-19 Jan) as the number of active regions on the visible
disk dwindles and Region 2259 decays.


Solar activity was moderate. Recently departed Region 2257 (N07, L=322)
produced an M2 (R1-Minor) flare at 14/1258 UTC. The region continued to
produce several C-class flares as it rotated off the west limb including
a C2 long duration event at 15/0334 UTC. Region 2259 (S15W20,
Esc/beta-delta) showed development in its trailer spots as well as
gaining a weak magnetic delta in the new spots. However, the region only
produced a lone C2 flare at 14/1826 UTC. All of the other regions on the
disk were either stable or in decay.

Other activity included a filament eruption observed at about 15/0338
UTC in the NE quadrant of the disk. The 6 degree long, east-west
oriented filament erupted along a channel centered near N16E15. SDO/AIA
304 imagery observed material movement across the disk in a NE
direction. Limited SOHO/LASCO C2 imagery observed a slow-moving CME
lifting off the NE limb, first visible at 15/0424 UTC. Further analysis
will be conducted as additional imagery becomes available.

.Forecast…
Solar activity is expected to remain low with a chance for M-class
flares (R1-R2, Minor-Moderate) for the next three days (15-17 Jan).